I have had the good fortune to visit a few of the world’s great cities. Paris. London. Madrid. New York. Los Angeles. While they vary in age, each of these metropolises exists as a symbol of mankind’s ability, ambition and drive.

Each is also notorious for its terrible traffic, and its alternately inept and murderous drivers. I’ve been there. I’ve seen it. And if you haven’t been exposed to the incredible breadth of culture — and attendant lethal transportation — any of these places has to offer, I can assure you everything you’ve heard about getting from point A to point B in each is true. That shit can be terrifying.

So it is with some degree of experience that I assert that the stretch of State Road 60 from I-75 east to about Parsons Avenue in Brandon boasts THE WORST TRAFFIC ON THE FACE OF OUR EVER-LOVIN’ PLANET.

I used to have this theory about Pizza Hut.

I suspected that someone very high up in the Pizza Hut corporate structure, someone wealthy and influential, had an adult son or daughter. And this adult son or daughter lived under the misapprehension he or she was actually a visionary, a genius, an IDEA PERSON — sort of like Michael Keaton’s character Bill Blazejowski in the classic 1982 comedyNight Shift. The adult son or daughter couldn’t hold any sort of real, regular job, and at the behest of his or her wealthy, influential parent, was eventually given employment at Pizza Hut, where he or she was supposed to just kick back, shut up and collect a paycheck.

Unfortunately, this adult son or daughter had too many BIG IDEAS to just kick back, shut up and collect a paycheck. He or she kept saying things like, “What if we put cheese in the crust?” and “Check this out — we make a calzone, but it’s, like, a gross low-rent version of a calzone, and we don’t call it a calzone, right? We call it … the P’Zone.”

I was walking around the bar the other night, and as I passed a couple of guys I heard them trying to remember the name of the movie Pan’s Labyrinth. You know, they were doing that thing – “It’s got the, watchacallit, the fawn!” “Yeah, that was rad!” “And the douche bag Mexican general!” “Holy shit, why can’t I remember the name of that movie?!”

So I sort of leaned in as I passed and said, “I think you’re talking about Pan’s Labyrinth.”

And they both looked at me, and then one of the guys held up his drink in what I’m sure he thought was a philosophical way, with one finger pointed up, and he said, “you know, you’re right!”

And I thought, Why would he say that? Of course I’m right. I generally don’t offer unsolicited input into strangers’ conversations unless I’m pretty sure I’m not full of shit. I only put the “I think” at the front of my statement so I wouldn’t come off like a dick. Do people actually just interject completely unrelated bullshit into private discussions among people they don’t know?

And then I thought, Actually, that might be fun.

So that’s what I do now.

“She said she likes that place, but the hibiscus tea has too much sugar in it.”

And I lean in and say, “Actually, the hibiscus is among the most dangerous of the Caribbean fighting eels. They make delicious tea, though.” 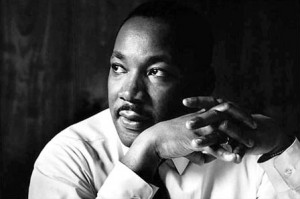 Today is the 44th anniversary of the assassination of Dr. Martin Luther King, Jr.

Considering Dr. King and his work, I am more convinced than ever that the vast majority of humanity’s negative tendencies and actions spring, at their root, from fear. Hate, envy, selfishness–it all comes from fear. Fear of the unknown, fear we don’t measure up, fear of not getting as much as the other guy gets.

And, most of all, fear of what we do not understand, and what we can never hope or learn to control.

You know what we can learn to control? OUR FEAR.

Tell yourself today that while you cannot control everything, you will not let fear control you.

(UPDATE: After Creative Loafing went to press, video surfaced that appears to show George Zimmerman immediately following the Trayvon Martin shooting. And people are already seeing more than it shows.)

Back in the very early ’90s, I caught a documentary on cable about America’s then-nascent culture of candid video. (Don’t hold me to it, but I believe it was an episode of HBO’s America Undercover series titled “Surveillance: No Place to Hide.”) It was full of manipulative, button-pushy emotional swings typical of programs made by folks who don’t want to come right out and tell you that THE WORLD IS GOING TO SHIT, PEOPLE — in the interest of journalistic integrity, they balance the doomsaying with a few beneficial elements, and let the music and the tone do the talking.

So you got, like, 45 amusing seconds of a naked guy caught locking himself out of his apartment by the building’s security camera, and 45 harrowing minutes of hockey-dad fights and gay-bashing and dash-cam footage of state troopers getting shot and stuffed into the trunks of the stolen sedans they pulled over for burned-out blinker bulbs. I vividly remember a segment in which a group of troglodytic kids steal a tourist’s camcorder and tape themselves gleefully beating said tourist unconscious. It might’ve been the first time in history a video made by criminals of their own crimes was used as evidence in their prosecution.

Sure, I could spend the next 20 minutes on YouTube viewing all manner of carnage, mayhem and pranks that end with surgical staples, and I wouldn’t be bothered in the same way. I’d probably be bothered in that vague my-soul-needs-a-shower sort of way. But come on; destructive young morons are hoisted by their own cinema-verite petards about once a week on average, and real-life death is just another prime-time entertainment option.