In the late spring of 2013, a deceptively simple-looking game appeared in Apple’s App Store. The premise was very straightforward: a player tapped repeatedly on a phone or tablet screen to keep a character with a rudimentary resemblance to a bird flying through an obstacle course of pipes that appeared stolen wholesale from Super Mario Brothers 3. 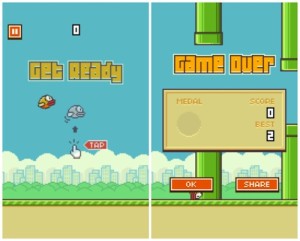 e notice and reviews without really making a splash. And then suddenly, last month, the game exploded. It shot to the top of the stores’ most-downloaded lists, earning hundreds of thousands of rave reviews and reportedly generating somewhere around $50,000 per day in revenue from the ads that popped up during gameplay. It also made an overnight media darling of its creator, Vietnamese developer Dong Nguyen.

Flappy Bird became more than a “meme” or “trending topic” online — it became a bona fide craze. Despite the fact that, aside from an increasing level of difficulty, the game doesn’t change much and is, as far as anybody knows, pretty much unwinnable.

Dozens of theories have been put forward to explain the game’s success. It was word-of-mouth. It was “bots” — automated programs designed to post fake reviews and artificially inflate download numbers. It was a cleverly designed stealth marketing campaign. Nobody really knows why Flappy Bird took off.