Yes, on that subject: I’m unbelievably stoked. To me, it’s probably the most important and telling thing that happened yesterday.

Why is a straight, married, fairly boring guy so stoked that two states became the first in the country to legalize same-sex marriage by popular vote?

Because the mainstreaming of our LGBT citizenry is currently the most accurate barometer we have for gauging our country’s level of tolerance for individual civil liberties. It’s very simple: more people being OK with gay folks having the same rights as straights = fewer people actively obstructing someone else’s happiness just because they’re scared of something they don’t understand. (And if you want to infer that I’m using code for “Crazy for Jesus” here, feel free, but you’d only be half-right.) 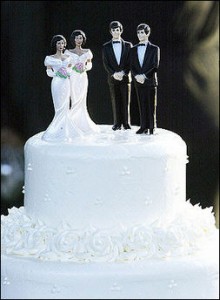 On Saturday, June 26, the largest gay pride celebration in the state of Florida will peak with the annual street festival in St. Petersburg.

The “unauthorized” Gay Days at Disney World which traditionally usher in the month of June have been called the biggest pride event in the world.

Florida is a red state; we’ve got the kind of proud tradition of political grift, land-grabbing, massive economic disparity and old-time religion that cements the status. But for such a demographically Republican area — and one deeper than the Deep South, to boot — our more metropolitan and bohemian centers have always been surprisingly tolerant, and occasionally even nurturing, of gay culture.

Of course, were one to indulge a few stereotypes, the whole thing makes sense. What are the main stereotypes regarding conservative Christians? I can think of two off the top of my head: They love money, and they find it quite convenient to have someone or something close at hand to blame when they’re inevitably caught doing whatever it was they most recently/vehemently denounced as wrong. I can also think of a couple of corresponding equal-and-opposite stereotypes often applied to gay folks: They’ve always got plenty of money, and their uninhibited and therefore surely debauched lifestyles are … well … just bad, somehow, bad and unnatural and undoubtedly responsible for everything from the decline of family values to Madonna’s otherwise inexplicably enduring resonance.