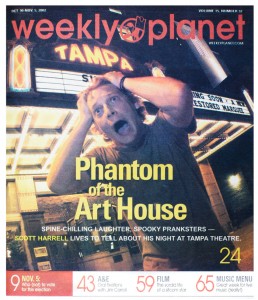 I have had the distinct and relatively rare pleasure of experiencing Creative Loafing/Weekly Planet from a wide variety of perspectives over the last two decades and change. As a casual reader. As a dedicated reader, a fan, a supporter of the community CL represents. As a member of the editorial inner circle. As a guy who used to work there. And, currently, as a freelance contributor — a member of the editorial outer circle with privileges, you might say.

Like a lot of young Bay area musicians, I first got in the habit of picking up the paper in order to see my band’s name in print. A decade later, when I picked it up in order to see my first byline in its pages, CL was a deeply entrenched element of my identity — for me, the alternative weekly wasn’t a holdover from the countercultural explosion of the late ‘60s; it was a very current guide to everything creative, disruptive, independently active people were doing.

It was weekly reinforcement that I need look no further than my adopted hometown for inspiration, for entertainment, for provocative political discourse. That fuck New York, look what the hell is going on right here, right now.

And it still is.