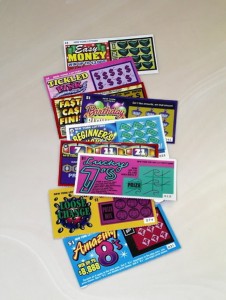 I’ve been doing pretty well with scratch-off tickets recently. Like, semi-homeless-alcoholic well; well enough that I’m starting to get snobby when I only win a ticket or one or two bucks.

So my question is, is it okay to give these low-payoff tickets as tips to, say, the pizza delivery person? I mean, they’re worth money, or at least another chance to win money–it says it right there.

I’m serious. If you were/are a bartender or somebody who brings food to those less motivated, and you received a pre-scratched scratch-off good for another ticket or small dollar amount (let’s say for the sake of argument that it was enough to be a decent tip, or at least accompanied by enough cash to make it part of a decent tip), would you:

A. Think it was charming or at least kind of funny/weird enough to make it worthwhile;

C: Fly into a rage at the idea of having to wait until the next time you wanted a quart of Natty Light, a SpicyMeetStix and a copy of Asian Girls Submitting to Light Corporal Punishment to get your tip?

Seriously, what’s the etiquette here? Because I’m not going back to the bodega for anything less than a tenner.