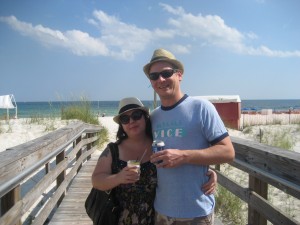 Yeah, so … the Perdido Key/Orange Beach/Gulf Shores region where Florida and Alabama meet. We go there at least once a year, because we have a family property and it’s a great place to unwind over a long weekend on the cheap. We can take the dogs along with us (more on that in a minute) so Rebecca doesn’t worry about ’em, even when gas is expensive we can drive there and back for less than the cost of two plane tickets to anywhere, and more often than not it affords us a fairly rare opportunity to see the family and a few of our non-local friends. (We actually didn’t see the family this time.) What’s more, this is an area coming back from the devastating ecological and economic effects of the BP Deepwater Horizon oil spill two years ago. Having had at least a slight presence there for the last two decades, we’ve enjoyed the beauty and pleasure of the area, and it’s important that we spend our time and money there when we can.

Some thoughts about and highlights of our most recent sojourn: