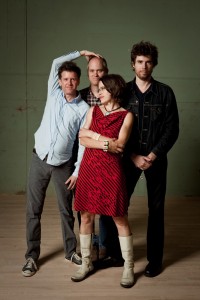 JW: No, and we’re not. [Laughs] I don’t think we ever planned on going back to anything like we had been doing for that 11-year stretch, or whatever it was, ’91 to 2001. We would tour so much and record so much, it was a full-time job, and everyone has kind of moved on in their lives to different things. It’s so much fun to come back to it in this way now, where you don’t have to think about it like, I’m kind of saddled to this for most of this year. We have blocks of things we’ll do, and one-off stuff, and we’ll plan our lives around that, Mac and Laura do Merge, people do Portastatic, I play with different people. Stuff moves around the other stuff, and that’s what makes it fun to go back to on occasion. You’re refreshed and excited, whereas in the past, toward the end of that stretch especially we were all kind of burned out on it, you just get tired of it, like anything you’re doing full time, you hit a wall at some point. Speaking for myself, I hit that wall. It was time to step away from it for a while.

The record does really have a tangible sense of youthful energy or ebullience.

JW: Yeah. I don’t really know what accounts for that. We really didn’t set forth with an agenda, but these were the songs that Mac had written. From Here’s Where The Strings Come In on, we kind of wrote the songs form the ground up, and we all came up with parts, wrote them together that way, and he would go off an write the melodies and lyrics. This time, because time was so hard to come by for us to get together in a room, he wrote the songs, and demoed, them, and would send us the demos. We’d learn ’em, and I’d come to town, and we’re run through them a few times and record them. It was a very fresh, spontaneous approach.

Was it strange returning to the sort of process where Mac had the structure of the songs pretty much in place before you guys came in?

JW: Not for me, because I had kind of gotten into this role as a supporting player for a bunch of different artists, and that’s kind of how I was operating for the last few years. If I’m playing with Bob Mould or someone, he would show me how the song would go that day, and we’d record it. I was in that mode.

I’m not quite sure what it was like for the others, but I really liked doing it that way. There’s less time to really overthink it. I think that’s the main thing. When I listen to a record like Here’s To Shutting Up or Come Pick Me Up, I can remember being in the basement and laboring over what to do. If you’ve only got a day or two to really figure it out, then you go with your initial idea, which is usually the best idea, I think. That might account for [Majesty] having this kind of cool, youthful bam-bam-bam quality to it.

From the outside, you seem to the guy who sort of stayed in it and remained the itinerant indie musician. I mean, you have your comedy [Scharpling & Wurster] and your writing and other stuff, but I imagine returning to touring with Superchunk wasn’t as strange or different for you as it was the other guys.

JW: Yeah, probably. For instance, I don’t think Laura plays much if any outside of Superchunk, but I had this weird period where I just kept going from one thing to another, which I loved doing. [Going back to Superchunk] was just like going to another project for me, though it was like going home, too. Going back to the mother ship. That was good, because I came back in super shape from touring all the time and especially after playing with people like Bob Mould, where you’re on 11 every night. I was in the best shape I’d ever been in.

At least one thing is different about touring for you, I imagine, since you’ve been sober more than a year now …

JW: I couldn’t really do it if I wasn’t sober at this point. I had this crazy stretch, last fall at this time when I toured with Bob and went straight through to a tour with Ben Gibbard and then a thing with Mountain Goats and then went to Japan with Superchunk, all within days of one another. It all worked out, but if I’d been drinking or partying during that, I wouldn’t have been healthy, or in a good frame of mind to do anything. If you cut that part out, just from my own personal experience, physically it’s just so much easier to do. And Superchunk is really high-energy, it’s kind of like running a race in a way, so it definitely helps, especially at our age. I feel like I’m 25 again, so that’s great, too.

Superchunk seems to have evolved in such a way that you never really have to contemplate the real, for-good-and-all breakup.

JW: I don’t know if it was always the plan, but definitely, putting your own records out, that part eliminates so much of the worry. We’re so lucky that Mac and Laura are the label, that’s such a concern for every other band – “who’s going too put out the record? Are we still going to be on the label?” That’s a huge headache that has always been out of the equation for us. We could do it indefinitely, and who knows?

You definitely seem like a guy who would be happy playing the drums for the rest of his life.

JW: I think so. But it’s funny, because there was definitely a period in the late ’90s, 2000 or so, where I was just tired of it. I just didn’t feel like doing it a lot anymore. Then I did a fair amount of writing, and I realized I did miss it a lot. So I’m lucky, I get to go back and forth. But it’s been music for the past three or four years, which I did not expect at all, and it really made me like drumming again.

How in the world does Superchunk manage to put together a set list?

JW: It’s tough, but I think we have at least 50 or so songs that are in our consciousness at this point, which I think we whittled down from 75 or something. [Laughs] It’s very random. We usually do the same four or five from the new record, or whatever, and then just … we try to hit a song or two from every record. We just see what people are into. Sometimes a song we’re into, nobody responds to it, and you maybe put that on the back burner for a couple of shows. I don’t know.