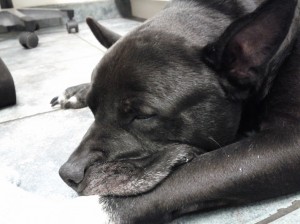 Early last month, two of our dogs got out of the yard.

I’d been fishing the night before, and must not have latched the gate securely while carrying in my gear. I was outside the fence and calling back Milo and Sophie before they could leave the alley.

As Milo the White Trash Terrordog loped my way, his hips wobbled and rolled in a disconnected way that instantly chilled me.

In the car, he was so anxious — both about traveling and about this strange new gimpiness he was experiencing — that he ripped out one of his claws. Of course, I didn’t know that until I got to the vet; I just noticed fresh blood spattering the upholstery and assumed he was dying on me — visions of the “chestburster” scene from Alien, or some fast-acting poison scattered in the alley by an unthinking neighbor, filled my head.