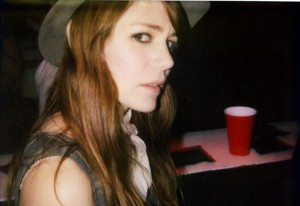 John Vanderslice: Just a really personable guy who was totally willing to let an interview evolve into a rambling friendly conversation. It’s always cool to ring up somebody whose work blows your mind, and find out he’s somebody you’d probably want to have a beer with to boot. Bonus points for recognizing me when we ran into each other at festivals for YEARS after the fact.

Aimee Mann: I was afraid to talk to her because she’s all smart and strong and clever and thoughtful and the mere thought of it made me feel like an anonymous dolt with a tape recorder, but she was cool, talked about an artist’s right to independence and the Til Tuesday days with equal openness.

Mike Dirnt: Witty, upbeat and just a good conversationalist. I’ve done two phoners with him, and he was fun both times. What do they say about work not seeming like work when the people you’re working with are great? It was like that, a couple of effortless talks.

David Byrne: I’m not a huge Talking Heads fan, but you can’t consider yourself a knowledgeable music buff without being intimidated by the idea of talking to David Byrne. Also, I’d heard he was a prick. I found him gracious, considerate and funny.

Jenny Lewis: Yeah, she’s as charming as she is talented and hot. Your blushing, stammer-y love is well justified.

Jonah Matranga: Another thoughtful, friendly guy who didn’t care about stock talking points. We used an hour and a half of tape. I was a bit bummed a few years later when he ranted at the crowd at a State Theatre show about talking during his performance, because it made him seem kind of [makes distasteful face in an attempt to express something like pretension], and he’s not really like that.

K.K. Downing: Yeah, that’s right, I got to talk to K.K. Motherfucking Downing last year, and it was priceless. It was like bumping into Jesus in line at the DMV and joking a bit about the wait, then he asks if you want to blow that shit off and go ride around in his GTO getting high and listening to Hendrix demos.

Trever Keith: We did a great interview that’s still high on Face to Face search-engine results, then I compromised my credibility by getting drunk at the Orlando House of Blues and demanding that he let me audition to become the band’s new guitarist by playing the show with ’em the next night in Ft. Lauderdale.

Ben Nichols: He was locked out of his new home, walking around it in circles waiting for his girlfriend to show up with a key.

Alanis Morissette: No, seriously, whatever, she was great, smart and down with the kind of comedy that I love. This one was special because, honestly, I wasn’t all that interested going in but she was very, very cool. Did you see that “My Humps” video?

And some interviews that blew:

Greg Graffin: Totally my fault. I was unprepared and feeling intellectually outgunned and I blew it. You can’t go into a phoner with Greg Graffin just winging it because you love Bad Religion; that’s like trying to hit on a brain surgeon by offering to analyze her psyche through the power of phrenology.

Odetta: Not to speak ill of this late folk and civil rights icon, but she was a total diva. “Music journalists” don’t enjoy being berated by their subjects. I didn’t get the memo on her stringent guidelines for interview protocol, and I didn’t think my time was so much less valuable than hers, as was so tangibly implied.

Buzz Osborne: Yeah, I know he’s “difficult” and “challenging” and all, but don’t do press if you’re just gonna act like it’s a huge imposition to do press. I got the distinct impression he scheduled the phoner so he’d be eating dinner and I’d have to listen to him answer questions around wet, meaty mouthfuls of food. (For the record, his publicist, Monica Seide, is the shit. She’s awesome.)

Jello Biafra: When the Kennedys came around sans Jello–insert joke here about there not being room–I was told by Biafra’s publicist that he wasn’t available for interviews, and I told her that I’d be talking to East Bay Ray about the conflicts anyway. Biafra called me directly within an hour, and the conversation had a distinctly political tone. Not as in current events, but as in spin. I still don’t know exactly what happened between Biafra and the rest of the Kennedys (and, of course, who the hell wants to see the Dead Kennedys without Jello Biafra?), but the whole thing had a vibe that reminded me of local-office mud-slinging, and really tainted my perspective of the older punk bands I’d thought so beyond such mechanizations.

The Kid That Played Bass In Silverchair: I asked him if he was going to continue his schooling in the wake of the band’s “Frogstomp” explosion, and he laughed at the idea and generally gave me the impression he thought he was a star and the sky was the limit. Oh dumb Australian kid, where art thou?